DATE FOR YOUR DIARY!

The 2016 West Cork Emergency Services and Friends Charity Cycle will take place on Saturday 9th July 2016.
We are now looking for applications from West Cork charities to be beneficiaries of the 2016 cycle. Please email wcorkemscycle@gmail.com for an application form.

We would like to thank The Parkway Hotel for providing the room and refreshments on the night. We would again like to thank everyone who supported the cycle this year, those who cycled, sponsored, stewarded or helped in any way to raise this massive amount of money. 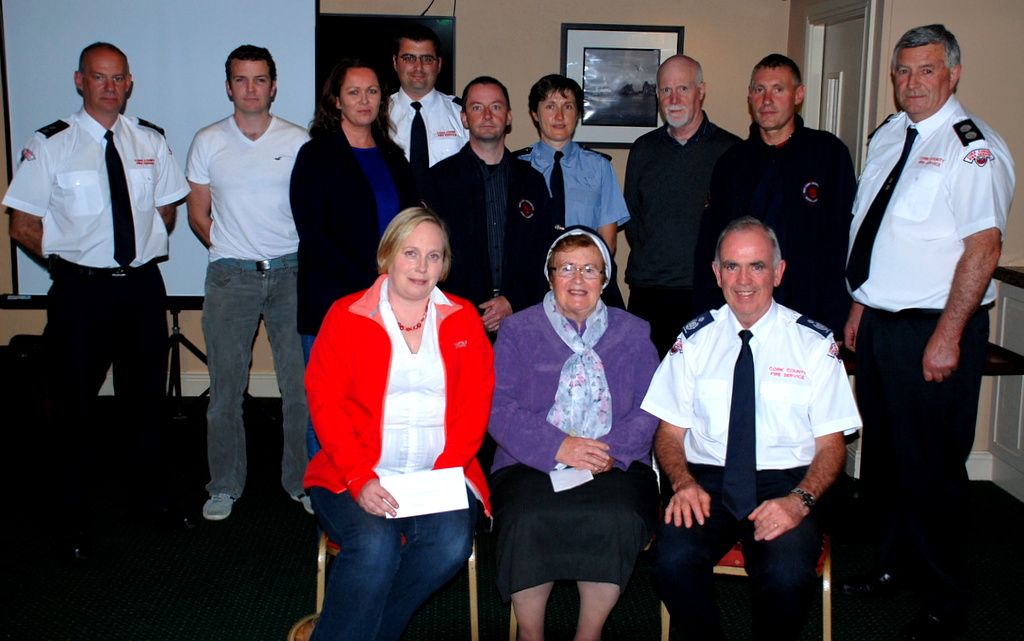 Almost 14,000 euros was raised from this years cycle. A big thanks to sponsors, stewards, cyclists and anyone who helped in any way to make the event a success.

The presentation will take place on Thursday September 17th at the Parkway Hotel, Dunmanway at 8pm. 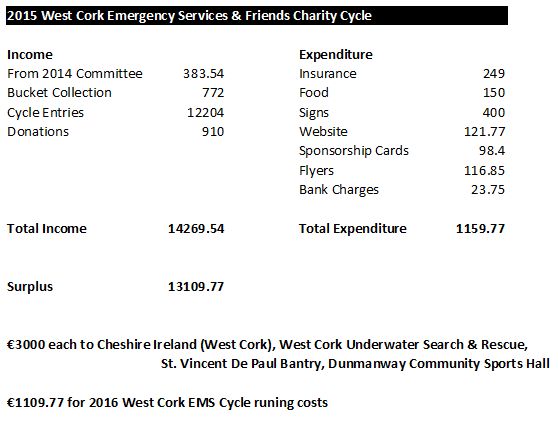 We’d like to say a huge big thank you to everybody for taking part and/or contributing to our Cycle last Saturday. The weather could only be described as miserable but the good humour and the friendly, smiley faces that people managed to put on was incredible! Fair play to you, great credit is due to you.

There are 300 / 400 photos up on Facebook and on Flickr; check them out and remind yourself what you went through for some very deserving causes.

Money-wise we did very well despite the weather, we have over €12,500 raised so far. If there is any outstanding sponsorship money left out there we’d be delighted if you could send it to us at Bantry Fire Station or directly to our bank account.

As we were starting and finishing in a new location and had a totally new route this year we would be delighted if you would give us some feedback or comments on the event. We will definitely have better weather next year but if there is any other way which you think we could improve the day please let us know either by email ( wcorkemscycle@gmail.com ) or on Facebook.

Once again thank you for your contribution, it really is appreciated and we hope to see you next year.

We would also like to sincerely thank the sponsors and volunteers who supported us for this years cycle. Please see our Sponsors page. We apologise if we have left anyone out. If we have, please email wcorkemscycle@gmail.com

Online Registration for this years cycle is now Closed. Registrations will be accepted on the morning of the cycle from 9.30am.

Week 8 of Paudie O’ Donovan’s training programme for this years cycle is up on our Facebook page at this link. Online Registration closes on Wednesday 8th July.

Less than 3 weeks to go! Week 7 of Paudie O’ Donovan’s training programme for this years cycle is up on our Facebook page at this link.

4 weeks to go! Week 6 of Paudie O’ Donovan’s training programme for this years cycle is up on our Facebook page at this link.

Week 5 of Paudie O’ Donovan’s training programme for this years cycle is up on our Facebook page.

Week 4 of Paudie O’ Donovan’s training programme for this years cycle is up on our Facebook page. Registration is now over 50% full. Register early at www.westcorkemscycle.org.

Week 3 of Paudie O’ Donovan’s training programme for this years cycle is up on our Facebook page.

Registration is continuing very well, nearly 50% full. Great to see some familiar names registering once again from all parts of the country. We advise people to register early to avoid disappointment. Once we are full registration closes.

Week 2 of Paudie O’ Donovan’s training programme for this years cycle is up on our Facebook page or on The Southern Star website.

Registrations are continuing very well. About 30% of places are now booked. Keep an eye on fitness section of The Southern Star from next Thursday where Paudie O’ Donovan will be plotting out an 8 week plan for those wishing to do the cycle.

For more information and to register go to www.westcorkemscycle.org

Now in its 12th year, having already raised over €400,000 for local West Cork Charities, the West Cork Emergency Services and Friends Charity Cycle will take place on Saturday July 11th.

The cycle is aimed at the ‘Leisure Cyclist’ as well as the ‘Committed Cyclist’ and will have two routes, 70 km and 100km. Both routes will start from the GAA grounds in Dunmanway and will head over the Cousane Gap, through Kealkill to Bantry. The main food-stop will be in Bantry Fire Station.

The organising committee would like to thank all the sponsors, Volunteers and the media partners, C103 and the Southern Star newspaper, and also to particularly thank, Garry Minehane and his team for all their great work in setting and running up such a wonderful event for the past 11 years.

This has always been, and will continue to be, a fun cycle not a race and cyclists are encouraged to take their time on the day and enjoy the social aspect of the event.

For the ‘Leisure Cyclist’, or those who have not been on a bike in a while and might be a bit apprehensive about tackling 70km, Paudie O’Donovan of the Southern Star will feature an 8 week training programme in his weekly column leading up to the event.

For further information and to register for the event log on to www.westcorkemscycle.org ; a Sponsorship Card will be posted out following registration. Spaces are limited so it is advisable to register early to avoid disappointment. Enquiries can also be made to Cormac Daly 087-2405606.

Now in its 18th year,
the Wild Atlantic Mizen Cycle
has already raised over 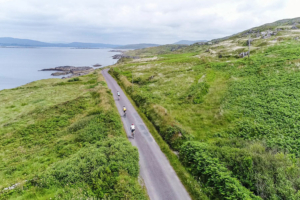 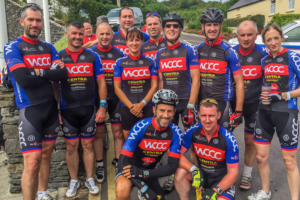 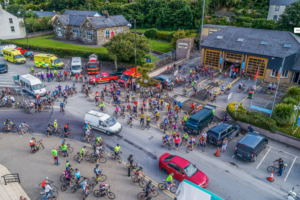 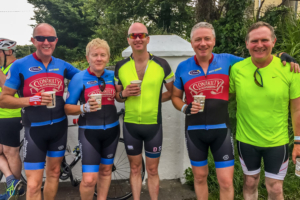